skip to main | skip to sidebar

What Pundits, Media, and the GOP Do Not Get About Trump. 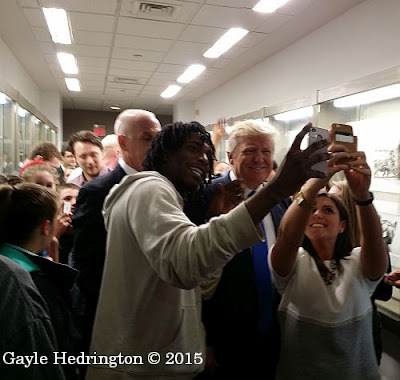 Donald Trump like most people his age was born and raised in a time before political correctness caused politicians to walk on eggshells. Walking on eggshells is like walking on a stony path barefoot. It slows you down.You become to busy concentrating on avoiding the small pebbles and divert your eyes and mind off your destination. Trump for all of his faults is admired because he does not take time to be PC it slows him down. Trump is a man who gets things done. In June of 1986, NY City’s six-year effort to renovate the Wollman Ice-Skating Rink in Central Park was $12 million over budget and nowhere near completion. Trump offered to take the project over and get it completed by Christmas and best of all with no cost to the City. Trump had the project completed by October 31, two months ahead of schedule and $750,000 under budget. At the time, Trump said, "We did a job here and we put a lot of guts into it and we're proud of it." The people are frustrated with the ice skating rink that Washington insiders have been working on for years. They want guts back into politics. They are tired of having our politicians apologize for every misspoken word. They are tired of electing officials to fight the opposition on bills only to see them cave in. They are looking for leadership and performance not lies and manmade delays due to eggshell walking. We have elected seasoned politicians and it has gotten us nowhere.give us someone with guts and a spine. Until the GOP produces that candidate, I am with Trump.
Posted by Gayle Hedrington at 12:55 PM 0 comments

Trains in Black and White 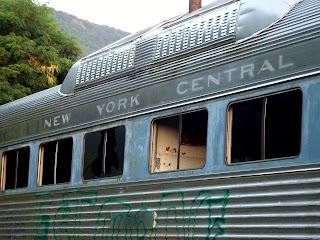 The sound of a train whistle brings images of another era show in my mind's eye. Several years ago, I bought my grandson Dillon a wooden train whistle, but I really bought it for me. I wanted to hear its melancholy, haunting, yet reassuring blows... The sound reminded me of my youth. Growing up in Trenton NJ I could hear the distant whistles from the train station when the wind and temperature were right. It was often last sound I'd hear before falling asleep.

My first memory of riding a train is when I was four years old, I don't remember the actual ride, only the train arriving. My mother called attention to the cattle bumper on the train, and emphasis the train we were going on was a steam engine. I looked at the huge black engine with the steam puffing from its chimney. It was a replica of my brothers' Lionel engines except they used a white pill with water in its puffer to make the fake steam rise.

Their engines pulled trains though paper Mache tunnels, over lakes of mirrors, and past tree lined city streets, assembled on an enormous piece of green painted, thick cardboard that was set up in the basement year around.

Trenton is between New York City and Philadelphia, and we often took the train to NYC or Philadelphia. The train brought us shopping, seeing the Christmas show at Rockefeller Center, and once it brought it back from Florida. The memory of the trip is from the Glory days of the railroad, the exquisite dining car with its highly polished silverware, crisp white linens, and our porter a dark black man, with a radiant smile, and wearing a stark white uniform. That contrast of colors is etched in my memory not only because of the porter but also because of segregation.

The trip gave me, my first exposure to the arcane practice. . I don't know what town we stopped at, but it was down south. It was hot and I went to get a drink from a water fountain. My mother stopped me, and redirected me to another fountain, explaining the first fountain was for blacks only. In Trenton, we did not have segregation, and the idea struck me as being mean

"Ssshhh, I'll tell you later." My mom said. Later when I asked why it was, she said she didn't know. I never received a good answer.

The sound also reminds me of walking along the train tracks, and listening for an oncoming train. Both my brothers played baseball, first in the Little League and then in Babe Ruth. The train tracks ran behind the baseball fields, and after watching the baseball game for a while, I would take a walk along the tracks. It gave me a sense of traveling, exploring, and discovering a magical, unfamiliar world waiting for me to discover its wonders and beauties.

Trains have always been part of my life in one way or another. Flattening pennies on the track with my best friend Janice as a teenager, taking a train back home after moving to NH, or going to NYC with Janice thirty years after we put pennies on the tracks.

This summer I've been taking pictures to show the Glory Days of the railroad for a photo competition. Traveling to the various railroad stations, walking the tracks and photographing trains from my viewpoint, has renewed my love of the train, the magic, the mystery, and adventure. I hope my pictures captured my feelings.

Last week I visited with my friend Janet. She is going through some tough struggles but she doesn't let it get her down, or not for long. During our conversation, Janet mentioned that a particular woman was a warrior. Janet was right. It made me think of all the women I know and lucky for me, most of them are warriors. Women, who get involved in issues, take charge of their lives, and stand unwavering for what they believe, no matter what the word throws at them.

I am fortunate and blessed to have so many strong, positive and friends. If you put them in a room, it would appear they have nothing in common. They have various political and religious beliefs. Some are married, some single, they are skinny,
rubensques, tall, short, sick, healthy, mother's, career women, business owners, college graduates, and high school dropouts, but the one thing they have in common is their strength.

Their strength makes them warrior women. These warrior women have been knocked down, pronounced dead, and lost everything they ever owned, yet they pull themselves out of the rubble and run through life's brambles barefooted, toward their dreams. A few of my friends have illnesses, maladies that most people would resign to death. Each day they wake, work, contribute to society, and continue to push forward.

I am blessed to have all of them as friends, they are all an inspiration.

Five Qualities of a Warrior Woman

In this digital age a lot of people get their information and news from internet including blogs. Blogs are great to get information, but is it journalism or opinion?

It's okay if the blog is an opinon but I see so many stories on blogs that are only minutes old. What have they investigated? How true are the facts? When I write a story for a newspaper (unless it is a feature) I use two or three sources. Two if the sources both agree, and three if there is a descrepancy.

If an event is attended by the blogger and they witnessed it first hand that fine. However I caution people to be aware of where the source is getting there information.

I've noticed more than a few times, bloggers repeat other bloggers blogs. It's a competative crazy world. Getting out fast doesn't always mean it's accurate.

Don't get me wrong. I enjoy reading blogs, in particular the themed blogs. They are more like news columns and not breaking news stories.

For the record.... I know newspaper get things wrong too...
Posted by Gayle Hedrington at 11:43 AM 0 comments

Nuts and Bolts of Writing

It has been a while since I blogged. The past few months were busy for me. I write for several publications and deadlines and summer… don't mix. Fall is here and I've vowed to write each day. So keep me at my word.

Writing is on my mind as always, it a part of me. When I was in a waiting room, I came across a piece in the AARP Magazine by Elmore Leonard (July/Aug. 2009) titled "Making It Up As I Go Along". It was fascinating reading. As writers, we often live in semi isolation when working on our stories, different thoughts cross our mind about our characters, plot, or method. I don't know about you, but I at times I wish I could turn around and ask a pro "Is it okay to do this? Or use that?" Leonard's article did it for me.

I often take pieces of people I know for my characters. I change them by giving them different occupations, different names and perhaps an added flaw or two. I was surprised that Leonard used one of his friend's real name in "Get Shorty."

If you haven't read the article, you can do so here: http://www.aarpmagazine.org/people/leonard_making_it_up.html


I look forward to hearing from you.

Posted by Gayle Hedrington at 11:06 AM 1 comments

I often get pains when writing a story. It happens when as I start to write a story that for some reason or another I deem significant. It also happens only when I write non-fiction. My anxiety builds gradually, like an expectant mother. I wonder how my new "baby" will turn out? What will its' name be? Can I love it as much as my previous "babies"? Will it be good? Will the readers love it?

The anxiety makes it difficult for me to pen the story. The story that I want to tell. I can list all kinds of facts, figures, and places; however, I want to show the heart. The pounding, racing blood of the tale that compels the reader, and leaves them a bit wiser and glad they read the story.

Now that I got those feelings out of the way, I am ready to write. Does anyone else go through this?
Posted by Gayle Hedrington at 8:52 AM 2 comments

This quote started me wondering what Samuel Johnson had in mind when he penned his observation. Samuel Johnson was an English author, critic, and lexicographer. He also possessed a great sense of humor as seen in his feeling about cucumbers "A cucumber should be well-sliced, dressed with pepper and vinegar, and then thrown out."

Although this quote is listed as a humorous love quote on many websites, I am not so sure. The first part of the quote " Love is the wisdom of the fool" is really sad. A fool's wisdom is love. Wisdom is what helps us make decisions and if a fool is making his decisions based on love it is bound to get him in trouble. It gives too much importance to love.

The second part of the quote "and the folly of the Wise" Folly is foolishness which gives love too little importance in the wise person's life.

Both are extreme abuses of love, for love should be an integrated part of life. It is only then, we can have a healthy love relationships, whether it is with another person, child, food, drink or money
Posted by Gayle Hedrington at 12:26 AM 13 comments

My Photos From Worldwide Photo Walk 3

This a great place to get your business cards, magnets, create your own calendars, cards and more.

Check out your exclusive 25% discount on custom printed products at VistaPrint. Order today!

Gayle Hedrington
I write for Sunacom.com and Inter-Town Record. I've had articles in The Old Famer's Almanac, and Soo-Nipi as well as the Argus Champion and Eagle Times.